Warning: "continue" targeting switch is equivalent to "break". Did you mean to use "continue 2"? in /homepages/15/d239941736/htdocs/clickandbuilds/TeddyAdams/wp-includes/pomo/plural-forms.php on line 210
 Bio – Teddy Adams
Skip to content 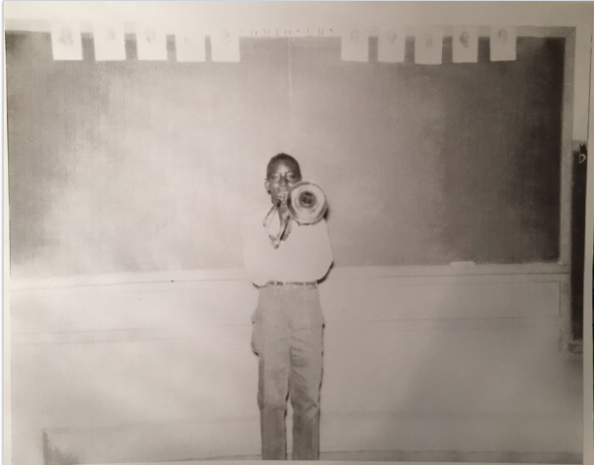 Trombonist, arranger, composer, and lecturer are talents that describe Teddy Adams. Born in Savannah, Georgia on August 20, 1941, Teddy began playing in elementary school and started playing professional jobs as early as high school. From 1956–1960, Teddy performed with the James Drayton Organ Combo, Bobby Dilworth and the Blazers, the Clay White Band, the Walter Langston Orchestra, Val Davis and the Blue Notes, Claude Roberts and the Jazz Messengers, and the Metronomes. In 1959, he was honored as being the most promising musician/ trombonist in Savannah by the AFM, Local 704 Musicians Union.

A four year music scholarship to Florida A&P University was postponed to pursue a music career, however, other forces steered Teddy to the U. S. Air Force where he fine tuned his music craft for several years in various Air Force bands throughout the U.S. and Asia. After being stationed in Washington D.C. and playing with musicians such as Bobby Timmons, Jimmy Hopps and Wilbur Ware, Teddy spent eleven years in Asia with his major concentration taking place in Tokyo, Japan with a two year stint in Bangkok, Thailand.

While being stationed and living in Tokyo, Teddy attended a music conservatory started by Japan’s premier musician, Sadao Watanabe. Also while in Japan, Teddy performed with Rufus Reid, Blue Mitchell, Art Blakey, and Abbey Lincoln. After returning to the U.S. in 1976, he teamed up with Bassist, Ben Tucker and co-led a mainstream jazz group called the Telfair Jazz Society. Since then Teddy has performed with other greats that include: Cab Calloway, Irene Reid, James Moody, Clark Terry, Jeanie Bryson, Johnny Lytle, Joey DeFrancesco, Ernie Andrews, Wynard Harper, Ben Riley, Doug Carn, Dave Steinmeyer, Pete Minger, Delbert Felix, to name a few. Teddy is presently teaching, lecturing and leading his own group. He also is on the Board of Directors for the Coastal Jazz Association, co-leads the Savannah Jazz Orchestra, and is one of the first inductees in the Savannah/ Coastal Jazz Association Hall of Fame.